Locking your trailer coupler is the best way to keep your trailer safe. A coupler lock protects your trailer by making it nearly impossible for a thief to hook up your trailer to their vehicle. The most secure and universal trailer coupler lock available, the Fastway Fortress will keep your trailer secure, providing you with peace of mind. It’s made from the highest quality corrosion resistant material and fits virtually every coupler style. In fact, after months of testing, we haven't found a coupler it doesn't fit. The most secure and universal trailer coupler lock available, fits virtually all 1-7/8”, 2”, and 2-5/16” tongue type trailer couplers. Made from the highest quality corrosion resistant materials, the unique design uses a hardened steel reversible “U” shaped shackle that allows the lock to fit almost any trailer coupler style, and is easily accessed from the front. Locking and unlocking the Fortress is quick and easy with a front-facing key hole so there isn't anything to reach around to turn the key. The lock cylinder is smooth, making it an easy key turn. The solid engagement of the dual locking pins into both ends of the shackle provides the most security and peace of mind you can get in a coupler lock. The lock has a winged cover, protecting it from dirt, debris, rust, water, and ice. The Fortress coupler lock is perfect for boats, RVs, ATV trailers, travel trailers, enclosed trailers, horse trailers, and virtually every bumper style trailer with a 1-7/8”, 2”, or 2-5/16” coupler.

J. Veazey
Could not get it to latch-onto coupler hitch like latching onto ball of trailer. The ball part of the lock will just slide in-and-out of the receiver hitch in the open, or closed position. I found that leaving the trailer hitch in the open position allowed the ball part of the lock to go up into the trailer hitch farther allowing the lock shackle to fit in a more secure position.
Lancelot
I own 5 trailers and have one for each! They lock up nice and tight and are hard to pick! I lost a key 2 years ago and the locksmith took over 45 minutes to drill and drill and drill to finally get it off my trailer! The trick is to put the lock to the rear, its was a bear for the locksmith to even get to the lock and then to drill was very difficult! Great locks for me!
ALLAN H.
The Fastway Fortress coupler lock fits perfectly, has all the features I wanted on a coupler lock, it looks killer tough, and it looks awesome on my trailer.  Importantly, I have the Eual-i-zer weight distribution hitch, and I was looking for a kit that had the receiver lock keyed the same as the coupler lock and the coupler latch lock.  I was not able to find a coupler latch lock that could be keyed the same as the other two.  Fastway,  please take note.

However, the kit that I found had all three keyed the same, but the receiver lock was not compatible with weight distribution hitches.  A serious caution here, most after market receiver locks are made of cheap metals that are not guaranteed against damage by the action of weight distribution hitches.  I contacted the manufacturer of the kit I found about this very issue, and that is exactly what they said.

However, Fastway does have a receiver lock that is compatible with weight distribution hitches.  Both the Fortress coupler lock and  the receiver lock can be keyed the same.  Just buy one or the other from somewhere (Amazon), then order the other from the Fastway factory after you receive the item you purchased.  Just tell them you want it keyed to match, and provide Fastway with the key number.  I  am a little over halfway through this process now, and have not yet received my specially keyed receiver lock. From this you can tell that I ordered the coupler lock first.

Please note that not all coupler locks will properly fit all hitch couplers. I borrowed a yellow Reese coupler until I could select and buy my own.  The Reese coupler lock span was not wide enough to span across the coupler on my trailer.  It did lock, but it was tilted.  It looked bad, so I searched and found the Fortress coupler lock.  Yahoo, so far.

If any issues pop up, I will update this post.

UPDATE:
I received the receiver lock, and it is keyed the same as the coupler lock. Yahoo, success, one less set of keys to deal with.

Customer
Works and fits well! Easy to operate, good value.
Jeff
Heavy duty great deterrent. Bought 2, fits both my 2" and 2 5/16 hitches well. Highly recommend.
Jerry Gould
Looks good and very functional
Anonymous
Product seemed great and worked well when I put it on my trailer initially. However, once I took it off and locked it again (off the trailer), the interior tumbler (inner circle of lock) rotated clockwise about 45 degrees while the key was out. If you look at the picture, you can see how the slots in the lock are misaligned. Once this happens, it is impossible to get the key back into to unlock it again. At this point, it is essentially a paper weight.

Amazon's return procedure was excellent, so I may try ordering another one of the same type to see if the same thing happens again. Other than this fatal malfunction, I did like the product. It feels high-quality, and worked nicely until the tumbler rotated incorrectly.
Willy J
Bought one for my 2 5/16" ball equipment trailer and one for my 2" ball snowmobile trailer. This is quite a substantial lock - both the shank and the body are very heavy duty. It comes with 4 keys. Both locks unlocked and locked well and fit securely in the ball sockets. They look like they will resist corrosion quite well. I like the fact that both ends of the shank lock as some of the cheaper locks only lock one end.

Also like the fact that they came via UPS in two days. Usually it takes me over a week to get UPS shipments from the East Coast.

My only bitch is that, because Amazon doesn't allow a comment on orders, I called the company and asked them to give me two locks with the same keys. The secretary couldn't find my order but said that she would inform order fulfillment to do so. That didn't happen.

I don't believe anything will secure a trailer in your yard if someone is determined to take it. This lock will keep someone form hooking it on a ball hitch. I secured the safety chains with another padlock. I also used a wire cable with another padlock to tie the trailer to my tractor. I think these three measures will keep it from being stolen but then I do also have insurance.

Yep, I know I have the shank on backwards in the pic. I have since figured out that the top bend goes to the back:)

Update 7/13/2017: After 2 years I am replacing one of these locks because it jammed because of internal corrosion. I see that they now put a rubber cap over the key entrance which should help. Lesson here is that, if you are in a wet environment, you should spray some WD40 in these locks once in a while. I hate spending $43 on a new one after only 2 years but still think it's the best lock for the money on the market.
Recommend Products 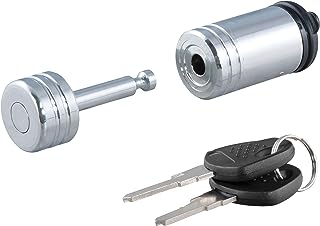 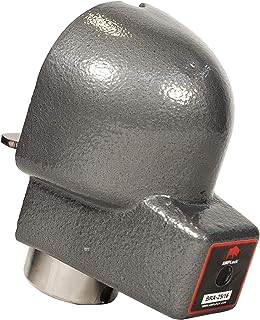 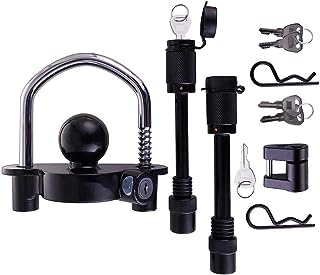 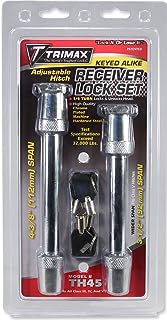 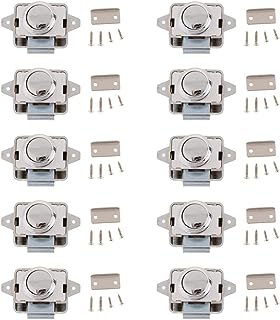 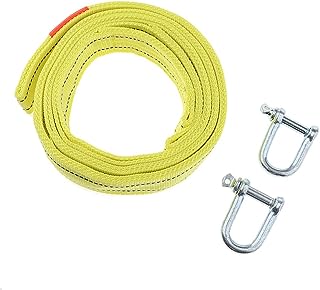 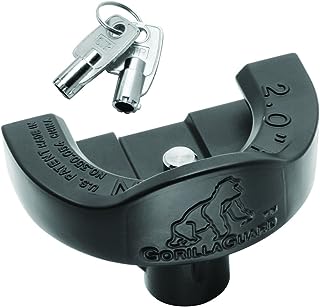 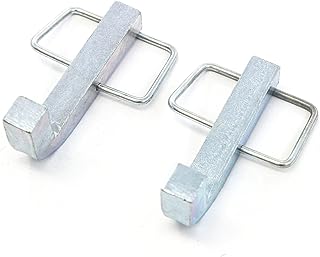 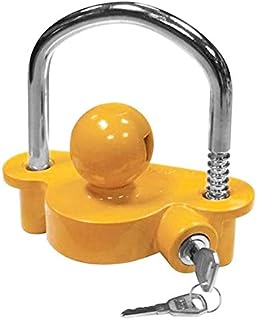 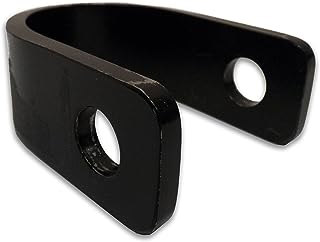